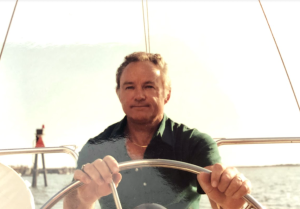 On Tuesday, September 29, 2020 the world lost a legend and a true Southern gentleman, Thomas Jennings Vann, who passed away after a brief illness. Even though he was 91, Tommy was ageless. He loved life and many people loved Tommy. He could be counted on to liven any party with jokes and stories – and he attended every gathering he was invited to.

Tommy was an avid golfer, boater, sailor, and photographer. As a teenager he worked at White Lake and that fueled his passion for the water – at one point he had the largest sailboat on the lake. He had many wonderful stories from boating on the Intracoastal Waterway from NC to Florida. He shared those stories and lots of laughs with the many boaters he met at Creekside Yacht Club in Wilmington. For more than 24 years Tommy directed operations there and led it to its greatest success. Even after retiring in 2017 Tommy loved going back and checking on his “boys” to make sure they were running things as he taught them.

The most important thing in the world to Tommy was family and friends and he was blessed with many lifelong friends. Tommy relished his golf trips with his friends Thomas Turlington, Bill Goodwin, George Williams, Davis Boney, Emsley Kennedy, AC Darden, and the many others who joined them through the years.

While living in Clinton, Tommy and Shirley spent many Wednesday evenings laughing and enjoying these friends at Fussell’s restaurant in Clinton. They claimed the largest table and called it “Sorry” table and elected Tommy president of the group.

Tommy entered every room with a smile and a good word for those assembled, and the room was brighter once he entered it. People like Tommy should live forever to show others how life should be lived.

Left to carry Tommy’s memory and aspire to live as he did are his loving and caring wife of more than 40 years, Shirley Sutton Vann who remains in the home they built together. He is also survived by his two loving daughters, Lisa Vann Pope and husband, Andy, and Lyn Vann Hobbs and husband, Felton, both of Clinton; sister, Polly McKnight of Raleigh; nine grandchildren, thirteen great grandchildren, and one great-great granddaughter.

Born in 1929 in Sampson County, Tommy was the son of the late Fonnie Jefferson and Pauline Alderman Vann. Tommy attended Clinton High School where he loved football so much that he and his friend Davis Boney stayed an extra year to play football. He then attended Campbell College for three years forgoing his final year to allow his youngest sister to attend college to save his family the cost of college for two children.

He joined the U.S. Air Force in advance of the draft. Tommy was proud of his service in the Air Force and frequently shared stories of what he learned and the people he met. While still serving he began working alongside his father selling cars at the Ford dealership in Clinton. He later went into partnership with Gus Womble to form Womble-Vann Ford and then bought out his partner to become sole owner of Vann Ford. He also served as President of the Ford Dealers Association.

When many people his age were retiring, Tommy launched a new career as director of Creekside Yacht Club where he worked for more than 24 years. Never one to be idle, Tommy was also a Realtor, served on the board of directors of Southern National Bank and Coharie Country Club, and as president of the Clinton Chamber of Commerce. He was a member of the Clinton City Council. He was president of the Jaycees, director of the Miss Clinton pageant and worked with the Miss North Carolina pageant. He was a member of Hiram Lodge #98 and a member of the First United Methodist Church in Clinton where he served on the Pastor-Parish Relations Committee.

A graveside service with United States Air Force and Masonic Rites will be held Saturday, October 3 at 3:00 pm in the Clinton Cemetery with Rev. Charles Royal officiating.

A memorial service will be held at Creekside Yacht Club on Sunday, October 4 at 2:00 pm.

Due to COVID-19, the family requests everyone wear masks at the services and observe social distancing.

Memorials may be made to the Boys & Girls Home of North Carolina, 400 Flemington Drive, Lake Waccamaw, NC 28450 or a charity of your choice.

Royal-Hall Funeral Home is honored to serve the Vann family.

To send flowers to the family or plant a tree in memory of Thomas Jennings "Tommy" Vann, please visit our floral store.