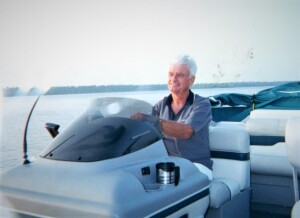 Born December 24, 1935, Thomas was the son of the late Robert and Blanche King.  He grew up in the Keener area of Sampson County and graduated from Halls School. Thomas was a District Engineer for the NC Department of Transportation, retiring after over 40 years. He was a member of Keener United Methodist Church. Thomas was an avid golfer, playing in many tournaments at Coharie Country Club.  Other favorite pastimes included spending time at Surf City beach, boating, spending time with friends and traveling extensively after retirement.

He is survived by his wife, Janet, of the home; daughter: Julie C. King of Fayetteville; stepdaughters: Martha Ray Bradshaw of Clinton and Marcia B. Shaw of Cary; grandson: Henry Dyer; granddaughter:  Jena Thacker; two great-grandchildren, and three step-grandchildren.  He is also survived by his sister, Velvadean Oliver of Clinton, as well as several nieces and cousins.  Additionally, he is survived by Janet Johnson of Harrells, his devoted caretaker of nearly three years. He was preceded in death by his daughter, Jennifer Devone King.

A private Graveside Service with the Reverend Leanne Calhoun officiating will be held at Keener United Methodist Church Cemetery.

The family will not receive visitors at the home due to the Covid-19 precautions; however, you may leave your condolences for the family on Thomas’ obituary page on the website of Royal-Hall Funeral Home at www.royalhallfuneralhome.com.

In lieu of flowers, memorials may be made in Thomas’ memory to Keener United Methodist Church c/o Ann Hobbs 4750 Hobbton Highway Clinton, NC  28328.

Royal-Hall is honored to serve the King family.

To send flowers to the family or plant a tree in memory of THOMAS DEVONE KING, please visit our floral store.