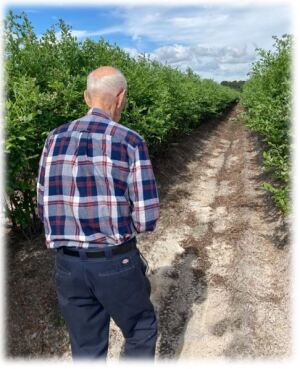 Mr. Herbert Wayne Cannady, 92, of the Harrells Community, passed away on November 30, 2021 at his home, surrounded by his loving family.

Herbert was born in Bladen County on August 7, 1929, to Roberson and Annie Jane Holland Cannady. He was the ninth of ten children. Most of his life was spent in the Clear Run and Harrells communities in Sampson County.  He graduated from Franklin School, then served in the US Coast Guard.  In 1954, he married the love of his life, Peggy Anne Cox.

Herbert was a third-generation beekeeper and had forgotten more about bees than most people ever know.  He owned Eastern Shore Apiary and served other beekeepers in the state as a Bee Inspector for the North Carolina Department of Agriculture.  In 1993, Herbert was named the “Person of the Year” by the N.C. State Beekeepers Association.  He loved driving through blueberry fields in the spring to make sure that the bees were working to pollinate the blueberries and he always kept a close eye on the gallberry blooms to see how good the honey crop would be.

Visitation will be held on Friday, December 3, 2021, from 6:30 pm – 8:00 pm at Royal-Hall Funeral Home. Funeral Services will be held Saturday, December 4, 2021, at 2:00 pm at Siloam Baptist Church in Harrells with Rev. Tim Register officiating. Burial will follow in the Harrells Cemetery.

Memorials may be made in memory of Herbert to Siloam Baptist Church, 833 Tomahawk Hwy., Harrells NC 28444.

Royal-Hall is honored to serve the Cannady family.

To send flowers to the family or plant a tree in memory of Mr. Herbert Wayne Cannady, please visit our floral store.