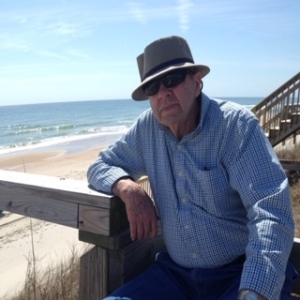 Billy was born on July 26, 1934 in Sampson County. He was the son of the late David Solomon Chestnutt and Pearl Tew Chesnutt of Sampson County and a veteran of the United States Air Force.

Billy was a man of strong faith. He was an active member of Evergreen Baptist Church for over sixty years.  There he was a valued member of the church choir and held the title of deacon emeritus. In addition to his love for the Lord, he was dedicated to ministering to those in need.  Open Door Ministries in Delway, NC, was where Billy found much of his joy. During his time, he had the opportunity to minister to many men who were involved in the program, many of which stood by him during some of his most difficult times.  Billy cared deeply for each of them and considered many of them as his own. Billy had a contagious smile, and anyone who knew him never walked away without a good laugh.  In addition to his love for the Lord and Open Door Ministries, Billy never missed the chance to see his great grandson’s play ball. No matter the season or the weather, you would find him sitting on the bleachers or watching from afar with the windows rolled down. Sunday’s were not only spent at church, but also included family dinners and NASCAR. If for some reason Billy could not watch the race live, he made sure it was recorded along with his favorite past time, Westerns. Billy will be greatly missed by all who had the pleasure of knowing him; because to know him, was to love him.

A Memorial Service will be held on Thursday, June 25th, for the immediate family only, at 11:00 am at Evergreen Baptist Church with Rev. Dustin Gillespie, Rev. Byron Bass and Rev. David Chestnutt officiating.

In lieu of flowers, the family will thankfully take donations for the ministry at: Open Door Ministries, 199 East Magnolia Lisbon Road, Magnolia, NC 28453.

Royal-Hall is honored to serve the Chestnutt Family.

To send flowers to the family or plant a tree in memory of Mr. Billy David Chestnutt, please visit our floral store.