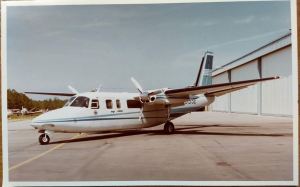 Mr. Kirby Devane Powell, 82, passed away peacefully on Sunday, March 1, 2020 at Vidant Medical Center in Greenville, with his two daughters and sons-in-law by his side.

Kirby was born on July 5, 1937 to the late Gordon Best and Alene Darden Powell. He was raised in Clinton, NC and graduated from Clinton High School in 1955, where he was student body president during his senior year. After graduating high school, Kirby joined the Air Force, serving four years as an Air Weather Observer. He was stationed in Okinawa, then Wichita Falls, Texas. His love for flying began in the Air Force and continued throughout his life.

In 1963, he and his family moved back to Clinton, NC, where he earned his pilot’s license in 1968 and began his flying career. He was a private pilot for several local companies, before he began flying for the State of North Carolina. He worked for both the Department of Commerce and the Department of Transportation, flying both Governors Hunt and Martin. In 1993, Kirby retired from flying. Later in his retirement years, he moved with his wife, Myrtie, to the North Carolina mountains, where they split their time between the mountains and Clinton.

Kirby was a charter member of Grove Park Baptist church in Clinton, sang in the church choir and was a member of a men’s quartet. His favorite things were flying, golf and family. He had a dry wit, liked meeting new people, and loved his Cadillacs and cowboy hats.

Funeral services will be held Thursday, March 5th at 2:00 pm at Grove Park Baptist church with Dr. Dennis Bazemore and Rev. Cameron Dunn officiating. Burial will follow in the Grandview Memorial Park in Clinton. The family will receive friends on Wednesday evening, March 4th, from 6-8 pm at Royal Hall Funeral Home; and at other times at 1002 Raleigh Road, Clinton.

The family would like to extend their sincere appreciation to the staff of Vidant hospital for their exceptional care.

Flowers are welcome, or memorials may be made to Grove Park Baptist Organ Fund, 609 Northeast Blvd., Clinton, NC  28328.

Royal-Hall is honored to serve the Powell Family.

To send flowers to the family or plant a tree in memory of Kirby Devane Powell, please visit our floral store.