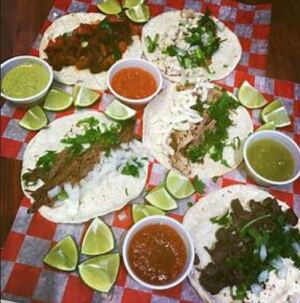 Born on February 13, 1963, Enrique was the son of the late Silvia Rivas and Enrique Elizondo Garcia and spent his childhood in Mexico City.  While growing up, he enjoyed playing golf and tennis.  Enrique attended Missouri Military Academy for high school and then the Universidad Autonoma de Mexico where he majored in accounting. Enrique then went to San Antonio, TX for his Masters in Business Administration at the University of Texas. There, he met the love of his life, Denise Addison. After getting married, Enrique and Denise moved to Mexico City and had their two children Denise and Enrique. In 2001, following a job opportunity, they moved their family to Brandon, Mississippi. In 2007, after a brief stint in Sumter, South Carolina, Enrique, and his family were brought to Clinton, NC by Premium Standard/Smithfield Foods. Soon after, Enrique followed the footsteps of his father and pursued his lifelong dream of owning his own business. He started Tortillas Carolina, a business specializing in producing fresh corn tortillas. Enrique and his wife Denise quickly expanded the family business and began making tacos and other Mexican favorites; all while expanding their tortilla production. In his free time, Enrique enjoyed reading, writing, and spending time with his family.  He was a very proud father.  His son, Enrique, recently graduated from law school and his daughter, Denise, will graduate from medical school this upcoming May. Enrique will continue to live on through his wife and children who are very proud of him and the life he worked so hard to build. They will miss him dearly.

A Memorial Service will be held on Wednesday evening, October 27, 2021 at 6:00 pm at the Royal-Hall Funeral Home Chapel with Father Joseph Dionne officiating. The family will receive friends one hour prior to the service, beginning at 5:00 pm, at the funeral home.

Royal-Hall is honored to serve the Elizondo family.

To send flowers to the family or plant a tree in memory of Enrique Elizondo Rivas, please visit our floral store.