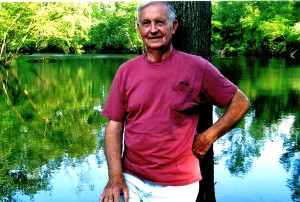 Born on Jan. 26, 1930, in Greensboro, N.C., Mr. Burgess was the son of the late William Maurice Burgess, Sr., and Annie Bristow Larue.  He was a veteran of the U.S. Army, a former Scoutmaster and a retired farmer. He was a member of Siloam Baptist Church, where he sang in the choir and was a former deacon.

Mr. Burgess was preceded in death by his beloved wife of 61 years, Angelyn Maynard Burgess. They enjoyed singing together, gardening, observing wildlife of all kinds, raising bluebirds and chickadees, and sitting on the porch swing watching the hummingbirds. He loved boating and fishing at the coast and on the Black River. He was an avid collector of antiques and a lifelong admirer of and caretaker to cats.

The family will receive friends one hour prior to the services at the church, in the Fellowship Hall.

Memorials may be made to Siloam Baptist Church and the North American Bluebird Society (www.nabluebirdsociety.org).

Royal-Hall is honored to serve the Burgess family.

To send flowers to the family or plant a tree in memory of Samuel Filmore Burgess, Sr., please visit our floral store.